> All the 1st generation 997 except the GT3 and the Turbo

This version has 200 cell metallic sport cats.  They replace the original cats and provide a more efficient gas flow.  The result is an additional 12hp and a greater sound.

Our exhausts all fit onto the original interfaces.  By this we mean their entry, their outlet and their size are the same as those of the original part. They can therefore be fitted in replacement of the original part without requiring any modification. The straps for fitting these cats are included.

These cats fit under the car between the headers and the rear muffler.  We recommend you start by disconnecting the plugs of the Lambda probes, then remove them once the cats are dismantled.  It isn't easy to retrieve the Lambda probes so be prepared to buy new ones or have some already to hand.  It is often necessary to cut the sleeves at the cat outlet with a grinder so be prepared to replace these too with OEM Porsche sleeves.

On average, it should take about 2 hours to fit them including the time taken to dismount the original exhaust.  It will be faster if the exhaust you're removing is in good condition, just as it may take longer if the reverse is true.

You will need a car hoist for the job.

Remember that the bolts must always be tightened progressively across the entire set of bolts. 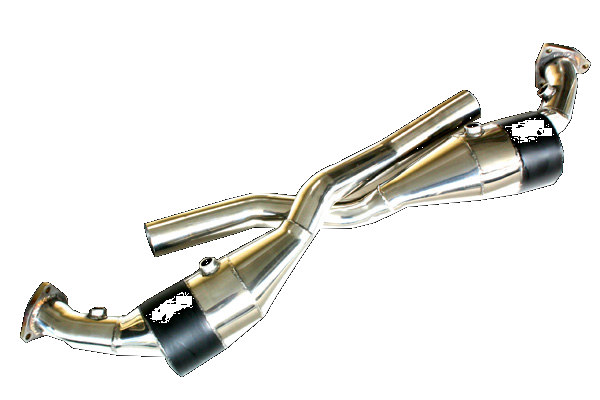 having sold my Boxster 3,2S with a SCART Récital, with which I was entirely satisfied, I set about finding an exhaust which could give a great sound to my new 997S 3,8 from 2006. Despite a natural attraction to the SCART sound, I allowed myself to be tempted by the Dansk silencers which promised the melody for an interesting price... Mistake!! At low revs, the sound is hoarse and seems pleasant... but as the revs increase, it's awful! Absolutely no harmony! the sound remains desperately deep just like a muscle-car or an American V8! at high revs the flat's sound is completely ruined and I found myself regularly reaching for the switch to hear whether or not the revs were in fact rising. in short, disappointed, I decide to dismount the Dansk after only 4 months and order the Scart with valves to replace them... once I receive the Scarts I dismount the Dansk.... two surprises await!! one of the Dansk silencers made of so-called "stainless steel" has a crack! and once I hold the two brands (Scart and Dansk) next to each other, the superior quality of the Scart stainless steel is so obvious!! In short... I tried the Dansk but clearly when compared with the Scart you can see straight away that the Dansk not only have a vastly inferior quality but also a very approximate (or no) development in terms of sound. so for me the choice is made! i won't be making the same mistake again!

What a dream, ear-extasy after adding an Ultima to my 997; melodious at low revs, at high revs, an orgasmic recital and not at all tiresome when cruising, the initial cost is soon forgotten as soon as you turn the key.

Hi everyone.  Early September fitted a SCART with Valves on a 997S.  Sheer pleasure! to be used without moderation! Run-in period concluded on the roads of the Mont Ventoux. Will have to go to the SCART stand at the paradis porsche meeting this weekend to share my great satisfaction.

Having looked into the subject, I decided to fit my 1st generation 997 with a Scart with valves, with 2B Autos in Chambéry (Savoie).  Sheer pleasure for the last four months. Valves closed the sound is deeper and lower than the original and yet unobtrusive (my wife copes with it very well indeed!!). However, valves open, it's not the same car, the sound is throaty, powerful but pleasant and passing through tunnels (and not only then...) pure joy. When I shift down "she farts" like a racing car and I'm smiling from ear to ear. To make it short I highly recommend it, and my car is transformed and is so much more pleasurable. Personally I chose the remote control which I prefer because there are no wires, no drilling. Well done to the Scart team and to the team at 2B in Chambéry. Alain

At last!! my "frog" is transformed into conductor. The ULTIMA RECITAL has given my 997S a true "vintage" sound  Thanks for your welcome and professionalism and long live SCART

Hi everyone, as owner of a 997 carrera S cab from 2005 for the last year and a half (having previously had a 348, élise sc, superlight cats) all stainless steel, I wanted to improve the musicality of my air-cooled (heresy) flat six. I rang Scart and Guillaume suggested that I come by to give the underside of my 911 a check-up. Surprise the silencers were made by... "Maranello"!! re heresy! In short, we decided to fit the Scart catalysers with a BMC filter. Christophe, master of works, fits the cats, the filter and the wide diameter stainless steel tailpipes, all really excellent, its a pleasure to work with enthusiasts. At start-up...a little disappointed... at acceleration better, run-in good, the sound is rounder hotter, several extra dbs but not as fierce as I had expected. Return home, 200kms and run-in 100kms ...better and better. arriving home where I share a garage next to my wife's practice, she askes that evening : what's that racket (re heresy)... ok to sum up : if you take U2 in your stride at 2000 revs, ACDC at 6000 revs... listen to SCART!!!!! ..nb we have two lives and the second begins once you visit Scart rgds Damien/Confucius

A quick word to inform you of my entire satisfaction.  I'm the happy owner of a 997 4S fitted with a par of Scart Ultima Recital.  My porsche roars now! Thanks to mr Scart and to Guillaume for their professionalism

Owner of a 997c7s cabriolet and after an initial installation of an Ultima Recital by the company MCG, great sound but to my mind  a bit too much for a cabriolet which isn't the overrinding philosophy.  I shared my concerns with Mr SCART and after negotiation we agreed on a swap with a SCART CLASSIC and there...pure joy, which I would sum up as "DISCRETELY NOISY".

Owner of a 1st generation 997 S with the famous x 51 option (sport exhaust, modified cylinder heads, sport manifolds, optimised gear box and carbon air box), I wanted to add a bit of spice to the car's already quite virile sound. And so add a pair of sport cats.  Result : brilliant ! a huskier sound, more present and powerful, with an engine reaching high revs faster.  What more can you ask for!!!

Hello, I wanted to thank Martin SCART and all of his team for their "transformation" of my 1st gen 997 C2S. The car already had a Porsche PSE, on Mr SCART's advice I chose to keep the PSE but to change the original catalysers for a pair of recently developped SCART sport cats.  Result : MAGNIFICENT. The sound is cavernous, very deep.. the speed build-up is faster (15hp/20hp extra). Finally a remote control was fitted to be able to turn ON/OFF: EXCELLENT ! In summary: for all those who wish to transform their car I recommend Martin SCART.  THANKS to all the team

Hi, Well, I did it!  After a lot of hesitation I took the plunge and had a pair of Ultima Recital fitted last week in Aix en Provence (Plan de Campagne). 997 I 4S  Fabulous ! The sound is magnificent at full throttle, a deep, gutteral growl, it's just not the same car.  Through tunnels and narrow streets, a little bit of acceleration and you'd think you were a rally driver, add to that a little shiver of satisfaction.  On the other hand, when you're just at cruising speed you can hardly tell the difference with the original.  In short it's a great success.  I was in contact with Mr Mortier throughout and I thank him for his professionalism, he was a source of very good advice and even made himself available on a Sunday.  He really listened and answered all my questions and doubts ... Thank you.  For those of you who are still hesitating, I really encourage you to take the plunge - it's just great.  If anyone in my region (Aix en Provence) would like to hear the result, don't hesitate to get in touch via Scart.  Thanks once again to the team.

At the age of 45, I have offered myself a boyhood dream = a 911, more precisely a 1st generation 997 S, which I wanted without the PSE: why ? to be able to fit one of M. Scart's Ultima Recital. Here at CP in The Reunion, the installation was quick and easy.  Now they're run-in, my silencers unleash their entire range of growls, a full round sound when accelerating and a "vintage metallic firecracker" when decelerating ! What surprised me, and pleased me, is that apart from the sound, the Ultima Recital creates a real ambiance... it's not just the person in the car behind you that hears it all, you can hear it all too when you lower the windows; and through a tunnel it's really powerful.  The Ultima Recital makes the flat 6 purr, or it makes the lion "scream" when you put your foot down.  I love it.  M. Scart's enthusiasm shows in the way he has developped his products, maybe I'm easily impressed, but just take a look at the video with M JC Bonhomme and his 2.7 RS 1973... what a sound ! Personally it reminds me of when I went on the Val de Vienne circuit in Vigent (86) when luck had it an authentic 2,7 RS was on the piste.